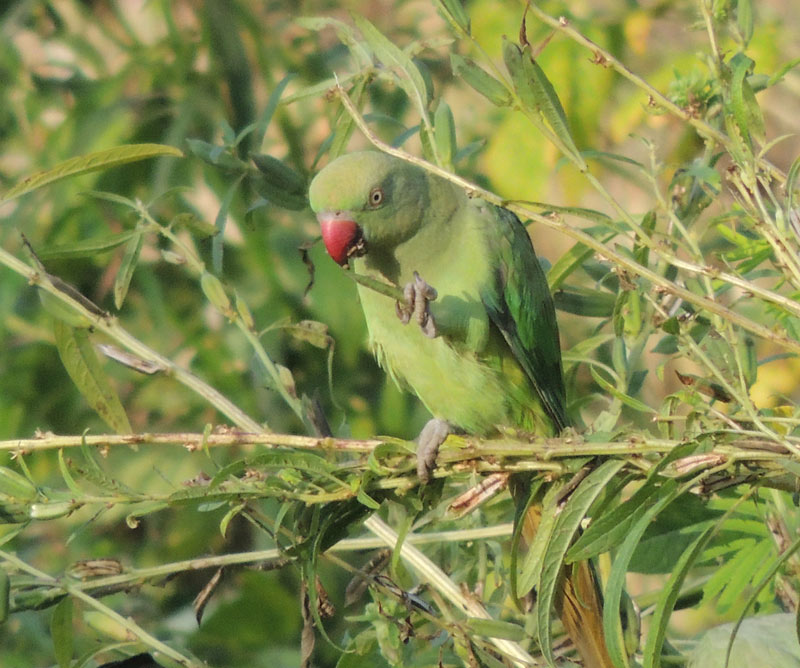 Here in our field house in Wasgamuwa, our care taker Siriya -local farmer, one day told me "I really want to kill all the parakeets in Wasgamuwa" frustratingly and angrily, I immediately understood he was seriously considering it. Siriya grows Sesame (Thala in Sinhala) in his Chena, during the dry season in Wasgamuwa.
The Rose-ringed Parakeets are the parakeets that he wanted to kill, because they devour his mature Sesame plants. Rose-ringed parakeets are native to Wasgamuwa; they have been identified and classified as a serious avian pest to agricultural and horticultural crops. I decided to observe Rose-ringed Parakeets in Siriya's chena to collect some preliminary data.
Rose-ringed Parakeets (hereafter referred to as parakeets) flew into Chena, in small groups of approximately 25 birds, particularly in the early morning and in the afternoon. On arrival they perched on a nearby tree before landing on the Sesame plants; presumably, to check the area first for human presence around the Chena. After observing the area carefully, they landed on the Sesame plants; by using their strong beaks, muscular tongues and their flexible feet, they collect the Sesame seeds effectively from pods that other birds find difficult to do.

After landing on a Sesame plant they climbed and searched for mature Sesame pods, looking for the seeds hidden inside. The zygodactylous foot pattern (arrangement of two forward and two backward toes) of the parakeet is well suited for climbing, moving sideways and for all other acrobatic movements.
Damage to the Sesame plants were caused by the landing and the searching action; initial heavy landing on branches forced branches to bend and later to break off. Because they do not feed randomly, they moved from one branch to other regularly searching for pods with mature Sesame seeds. As they search, they used their bills to hook onto branches, this damages the stems and branches. 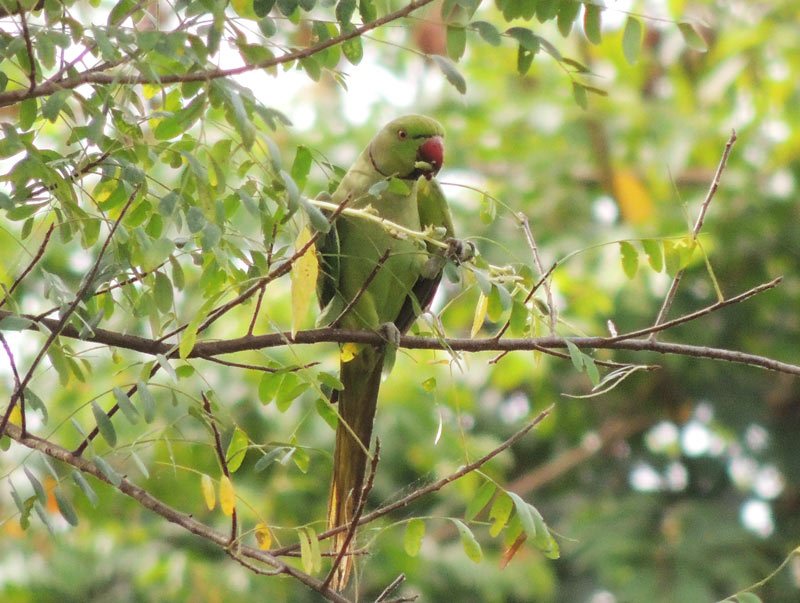 After finding a mature pod, the parakeets cut the pods off the stem using their strong beaks. I observed two different ways parakeets obtained seeds from the pods. One method I observed involved the parakeet holding the pod with their foot and opening it with their beak and slowly extracting some seeds. When the parakeets extracted seeds from the pods, they looked very messy as a lot of seeds became glued to the outer side of their beaks.
The second method I observed involved the parakeets keeping the pods in their beaks, opening it partially and then moved the pod laterally in the beak, nibbling the seeds. For this method they did not use their feet at all and after getting some seeds they just dropped the pods.
On occasions, the parakeets did not cut off the seed pod from the stem; instead, they cracked the pod whilst it was still attached to the plant and removed one half of the pod to reach the seeds. From my observations, I found this is a wasteful feeding method, as the parakeets discard one half of the seed pod and do not eat all the seeds that could be obtained. 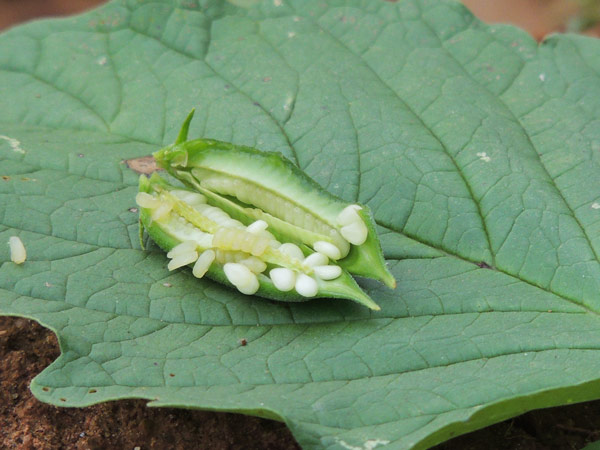 A tasty meal for a Rose Ringed Parkaeet no doubt, but a painful loss for Chena farmers

At times, they took a part of a Sesame branch with 10 -15 pods to a nearby tree and leisurely ate the seeds, while holding onto the branch with a foot; I also observed them doing this with one seed pod rather than a whole branch. However, taking a branch or seed pod to a tree was not a frequent observation.
Though parakeets do not feed randomly, sometimes they damaged immature seed pods as When they did it, they cracked the seed pod and ate only a few seeds.
The roosting trees nearby are a very important aspect of their foraging; they use those trees to scan the area initially before flying to the fields and also When the parakeets were disturbed, they would fly back to those trees for refuge, rather than completely flying away from the chena.
Siriya and other Sesame farmers in the area use catapults to chase the parakeets away; as parakeets are very quiet feeders, the farmers normally don't notice their presence in the fields. Sesame farmers generally do not guard their fields from birds like they do with their paddy fields, but like Siriya, all the Sesame farmers that I spoke to, were very concerned about the damage done by the parakeets. 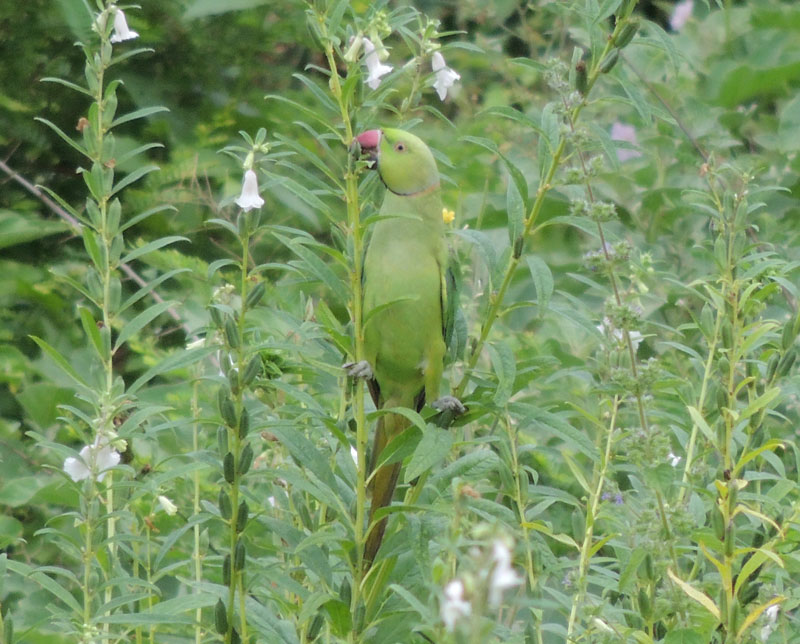 I did not attempt to quantify the damage; hence I do not know how significant the damage is to Siriya's Sesame harvest. It is clear that we need more research on this subject to learn more about this problem and to manage this problem effectively; apart from the study done by Professor Kotagama on parakeets damage to paddy, we have not done any scientific study on avian agricultural pest.
So I think it is time for us to put our effort into this subject. 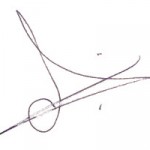